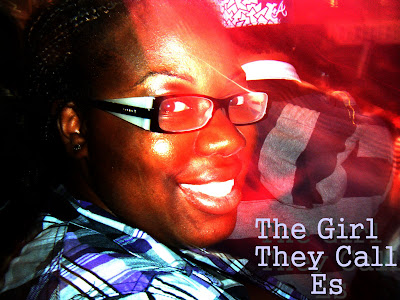 FINALLY! I'm ready to do this! Some pics are still not done but I'll post them later! But anywho, most of you know that I had the opportunity to attend-well not opportunity cause I paid $31 for that shit....to go to the ATL show of Asher Roth & Kid Cudi's Great Hangover tour. The show was at my favorite concert venue, the Tabernacle. So I'm gonna tell yall everything! And I mean everything! Here we go!

Arrival
So Erica didn't want to drive to downtown ATL, so like other ATLiens, we took the MARTA! MARTA is such a nice crazy lady! lol Anyways, so we get off at Five Points and walk to the Tabernacle. The line wasn't really long outside of the venue. But looking at the line, we noticed a whole bunch of white frat boy looking dudes. We looked at each other and said,"Asher." Few hipsters and typical hoochie type chicks were there as usual but there was one group of people I was scared of.....the Tween crowd! Like these little boys and girls were like middle school age! Aren't they suppose to be at a Jonas Brothers concert or some shit! I knew they were gonna act reckless! So because of "money issues", we had to buy our tickets at the show. The tickets were actually cheaper to buy at the show than to buy online.Write that down people! Get our tickets, they opened the doors, Erica and I rush to try to get front row, we were like one person away from the stage. Cool beans. 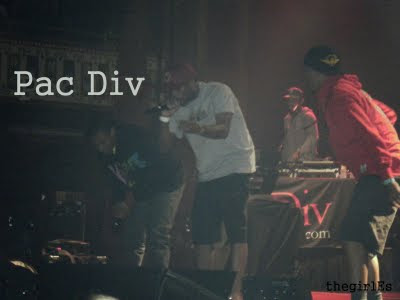 Okay so unlike most people in the audience, I actually came for Pac Div! I love these dudes. So while everyone is waiting for the show to start, I was telling Erica about Pac Div and all of their dopeness. Like how to dance to Mayor and how these dudes got some serious bars and stuff. There were a few people who came for Pac Div as well, but everyone else was like,"Pac who?" Typical ATLien shit. So the lights switched up (forgot if they turned them on or off) and next thing you know, you hear Like speaking. I know that dude's voice from a mile away! lol He talking about if we're ready for some good music and stuff like that-basic "Let's get this show started!" lingo. But he said something that stood out to Erica. He goes "We aint got no fancy light show, we just three niggas rappin." Taking shots at Cudi, Like? lol I hate the light show too, will explain later. So they come on stage and I'm just ready to get hype with them! They are some dope ass performers yall! Like very dope! They were feeding off the energy of each other which made everyone else hype. And for opening acts who perform in ATL, it's very hard to hype the crowd up especially if they don't know who the f*ck you are! But I would like to think many people walked out of that show Pac Div fans after their set! And plus, these dudes can spit and I think ATL Hip Hop fans can appreciate that. Love the part when they stop and started dancing to Poison! These dudes are the shit! PAC DIV FTW! Would love to them in concert again, anyday! 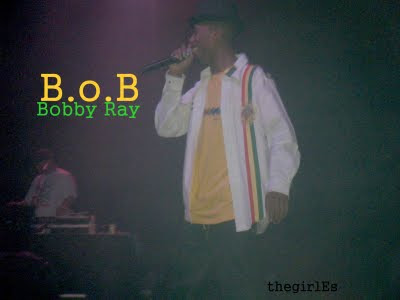 Okay, so Pac Div leaves and everybody knows who's coming...it's one of our very own....aww shit...IT'S B.o.B!!!...No, it's BOBBY RAY!..No it's-let me stop! Of course ATL was crunk as hell to see the homie B.o.B home! Plus, since ATL is his city, we knew he was gonna give us the best performance ever-and that he did. This dude came out jumping around and singing, Haters Everywhere (or whatever the name of the song is, yall know what I'm talking about). This dude was hype! B.o.B is a fabulous performer. He was working the stage, the crowd was always with him-even when he pulled out the guitar the crowd was still with him!...well at least Erica and I were! But one thing I kinda felt like it was unnecessary-the back up singers. You could barely hear them. But when ya did, beautiful voices but we could have done without. One of my favorite parts was when Playboy Tre came out and was just reppin hard for Atlanta. He was like,"We done been all 'round the world and back, tellin' people ATL is the best muthafuckin' city in the world!" He went on and on, the dude had me rollin! lol It was a freakin party during B.o.B's set! They had beach balls being thrown everywhere,we were jumping around like crazy, surprised no one ran up on the stage! B.o.B "swag and surf'd" through the crowd! The set was mad fun and hype and I will never forget it. You're the best B.o.B! What a dope homecoming! lol

Okay, thats part one of the review! Part two coming soon! But before I go, here's some footage of B.o.B aka Bobby Ray performing his song No Man's Land off his recent mixtape B.o.B vs Bobby Ray! Dopeeee shitttt!