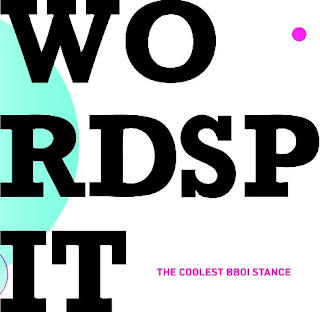 Wordspit-The Coolest Bboi Stance mixtape
Hello Good Morning! lol Today, I bring you my review of my homie's Wordspit's latest mixtape, The Coolest Bboi Stance. It dropped like...last week...or the week before. I got the zip file to unzip and thank God, because I didn't want to miss out on this dopeness. Wordspit is not ya average rapper. To me, he's kinda like everything Charles Hamilton tried to be before he went missing in action on us. Don't get me wrong I love C.Hamilton but he went kinda overboard with the Sonic the Hedgehog stuff and his theory of the color pink...yeaaaa. Wordspit is sane and the general public can rock with him without being confused. And they don't call him Wordspit for nothing, dude is spittin some serious shit! Yurpppp!
Ok, now to the dopeness at hand! I love this love mixtape. Its probably one of the more innoventive mixtapes I've heard in a while. As you listen to the mixtape, you truly go on a journey with Wordspit. That's what he wanted to do and he def did it! There's variety yet it's not all over the place. It's entertaining not only from a musical standpoint but also from a theartical standpoint. I could so see this mixtape being a short film or musical! lol Seriously that would be dope. I'm just really into the story that's being told in this mixtape. And even though each song is not about the same thing, you never lose the story from song to song.You can tell Wordspit really thought out this mixtape and didn't just record a bunch of songs and put it in a zip file and give it to everyone. And you know what, even if he did do that, he got me fooled! But I highly doubt he did and would ever do that. He does this for the people, he would never bullshit us! lol
This is a great mixtape for those of you who are not familiar with Wordspit to really see what he is about and to also enjoy some dope music. Don't try to put him in the box of "The Freshmen" or the box of "The Hipster Rapper", cause he's not gonna fit. Just love the kid for who he is and for what he brings to the table. As a matter of fact, do that with all these new up and coming MC's. The next generation of Hip Hop is and will not be like the last generation. So enjoy the dope shit they giving us, or listen to country music! lol I'm not even gonna front, some country music is ill. lol Ok, time for Tracks to Listen to!
Tracks to listen to:
Because of the story that is being told, listen to all of the tracks to truly enjoy the 'tape. But here's some of my favs.
Hello Good Morning
Not A Joke
Joystick Madness
Riot Sounds
LCA
Chop Suey
Support my homie and download and enjoy the mixtape!!! Til the next dope mixtape drops...outtie!
"Hello Good Morning, I'm out!"
-Wordspit
'Always More, Never Less'-Es