Life Of A Dope Girl. 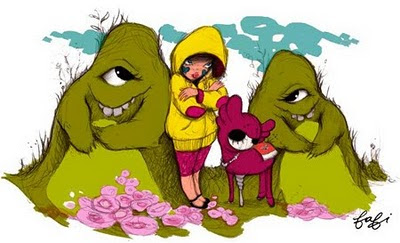 This is totally like a commercial break from our irregular scheduled program.HA!
So Tumblr is like kinda becoming the shit.For those who don't know what the fuck Tumblr is, in simple terms, it's like Twitter and Blogger had a baby.A really crazy, twisted, fucked up baby.Yea, if you are on Tumblr-you know EXACTLY what I mean. But it's dope.It's very simple.Like anyone who gets confused by Blogger and Wordpress and all the fancy HTML stuff but you still want to blog-get a Tumblr page.I don't really consider it a blog, maybe cause I actually have one but it's like an archive to me. It's easy to like "collect" things on there and post the most random shit ever! Like yall think I'm random on here? Until you've seen my Tumblr-you haven't nothing yet.
But as far as my Tumblr, Life Of A Dope Girl, its a lot more personally and "edgy" I guess compared to this blog.Get to see a lot more emotion from me and "expression".Like if you wanna see what kind of mood I'm in, check my Tumblr.Lol so yea, this is just an FYI about the page if you haven't check it out already. If you are on Tumblr yourself or about to join, make sure to follow me! I'll follow you back if you tell me you read my blog.Yea, muthafucka I'm shallow like that. Lol.
My main reason for doing this post is to draw your attention to a particular Tumblr post I just did and to give you some rules while browsing my Tumblr page.

+ i think i'm finally ready to takeover this thing called the internet.-just some insight on the history of my blogging and why I even do it and what I want to do with it in the future. Thought you'd like to read that.

+And now for the rules.Yes, rules.People often get my twisted like a damn pretzel on this Tumblr shit.So I'm puttin my foot down and passing some laws.

1.IT'S MY DAMN TUMBLR! I can do whatever the hell I want to.No, you can not "regulate" what I post, how much I post, where I post-just no. Access denied in that department.

2.Don't take every damn word I say to heart. If I want to say something to you personally, I will state your name like,"shut up Drew" or "I love you CKV!". If I do say something and you totally think I'm talking about you, just ask me. There is an ask option on Tumblr and you can even formspring me! I say a lot of general stuff.It could apply to anyone.You never know I could be talking about myself ...in third person! Lol, yes I'm that weird.And I mean every word I say, even the word graphics and pics with words on them-I mean those too. That's why I post them =).My words can apply to anyone and anything-so stop taking shit to the heart and crying all over the keyboard!

3.Music is HIGHLY important. I advise you to listen to and watch all the music and music videos I post. You could honestly take something from it, that's why I post it. Enjoy it but also learn from it.And I post the lyrics to song for a reason.Lyrics are life-breathe them, live them.

4.Don't be afraid to indulge. I tend to go on different Tumblrs and just sit there and look through every page. Like I'll be on the same Tumblr for hours just looking at post after post.No, it's not cyber stalking! lol they posted it for us to see it right? So don't be afraid to do the same with my Tumblr. I've "collected" a lot of dopeshit on there so I know you guys will appreciate that.

5.ENJOY YOUUUUU SELF! That's from Jon & Kate Plus 8 (when that show was the shit).But just relax and chill out and enjoy my fuckery! Like how you do with this blog. Calm yo ass down (lol) and enjoy it! That's all.

Life Of A Dope Girl

Wanna ask me a question or just talk shit hit me up on Formspring!

and yall already know the Twitter and all that good stuff!Iight, enough talking, go to my Tumblr-outtie!