If He Was Sick then, He COLD now! 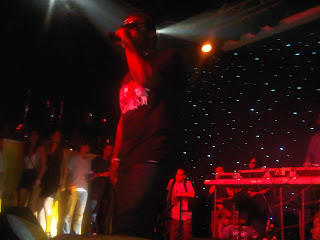 (Thanks for clicking the link and reading I appreciate it jo.)

Allow me to introduce myself. @TheGirlEs 'blogged named' me ChiHotJo for three reasons: I live in Chicago, I love Cheetos Flamin' Hot, and my name is Johanna. I ain't never been one to blog, so know you're poppin my cherry as you read along..
Last night's event at Chicago's Wild Hare was dope though. So I might just do this when dopeness arises. The line ran along the side the building and if you didn't have a ticket, you didn't know if you were going to be able to get in or not til you got to the door- point blank.

Rockie Fresh, a Chitown native, was one of the opening acts. I got to admit that dude seems to get better and better. This was my second time seeing him, first was at the LOTNC show at The Viaduct Theatre two weeks ago. He definitely knows how to vibe with the crowd and got the stage presence of a future star. The Suppliers, whom I had never heard of prior to (and they from Chicago) last night came out next. They were aiight. I could see people getting into their music, its about drugs, that shit is universal. They party high. I could see it. But I wasn't there to see them and after they threw water on the crowd that shit was dead. A fifteen minute set by DjO_zon was the perfect way to introduce Chip. That DJ knows his shit.

The crowd chanted for Chip twice and when he finally did come out, it was all love. DjO_zon had everybody geeked. It helped that some where white boy wasted.

The first time I saw Chip was in Cleveland at the HOB last July and if he was sick then- he's COLD now. There was nothing about him that wasn't dope. He came out with his bookbag giving his fans thanks for the support and light the crowd up when he said:


Chicago showin Chip love was dope to see and hear not only because I'm a fan but because I'm a Chicagoan. Chip kept the interaction with the crowd all night, telling us somebody tried to steal his car on Michigan Ave (ha) and pointed out his dope "all women cartoon" shirt.

He didn't do one song, two, three, no. He did a few, he told us he had already decided that for us he'd stay and do more. Finally Chip asked where our cups where at so he could share his Belvedere with us. And he did. Thanks to Chip's Belve I got gone. He ain't poured no little shot either, he was nice with it. And I was like fuck it, wouldn't you have? He even did a little crowd surf.

The show couldn't have gone any better. Chicago will keep fuckin' with Chip, that's for sure. If you get the chance to see Chip, do it. You won't regret it and you'll be seeing a performer who is just as happy to see you.

-You made it til the end, that's what the fuck is up, I already thanked you from the beginning (: --ChiHotJo
Email Post
Labels: Chicago ChiHotJo Chip Tha Ripper Performance Review Shows Video