TheGirlTheyCallEs Presents... the Top 20 Mixtapes of 2010. 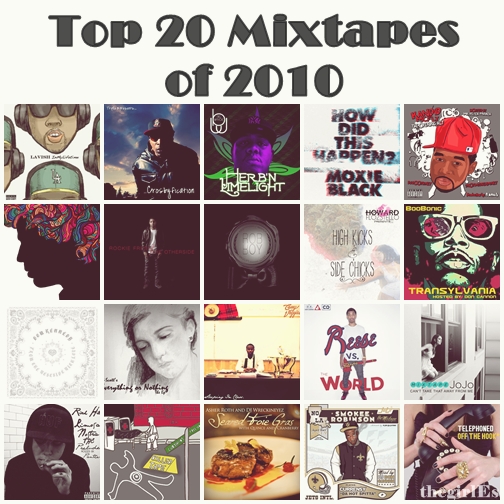 Howard Flozstello's High Kicks & Side Chicks- Awww shit! My nigga, Howard Flozstello, dropped a dope mixtape on yall ass!!! If you are a self-proclaimed stoner, this mixtape needs to be in your hard drive asap! If you just want some really chill, clever, dope music, this should be in your hard drive as well! Play this on a sunny Sunday afternoon, with some sweet tea on the side (and a blunt, joint, doobie, whatever floats your boat) ? I promise, it's heaven! High Kicks & Side Chicks > Kush & Orange Juice-and you can run and tell that! And I just love Flozstello's voice! I'm weird like that! Great mood music for everyone! Love it!
Favorite tracks: Global Shit, High Karate, and White Clouds x Blue Dreams

Boo Bonic's Transylvania- Guys, seriously. I'ma need for everyone to stop sleeping on my homie, Boo Bonic. Bonic is the truth, this should be a known fact! When this 'tape dropped, I'm looking at my friend like Katt Williams saying, "This shit right here nigga? This shit right hereee nigga?". He got on some of the hottest beats out at the time and murdered it! He is is flow is just f*ckin' epic. I love Boo Bonic and he went in on this mixtape. 'Nuff said.
Favorite tracks: I'ma Be, Rain On Me, and Lil G's

Dom Kennedy's From The Westside, With Love- Dom shitted on a lot of niggas with this mixtape in such a smooth way. Future Street/ Drug Sounds was nice but this mixtape is dope as hell. It's very classic too. I feel like years from now, people will still refer back to this mixtape as some of Dom's best work. Again, it's very Cali, which I appreciate. I'm still in love with this mixtape.
Favorite tracks: In Memory Of, 1997, Play On, and Long Way Home

G-Scott's Everything or Nothing- Heard a few tracks from G-Scott here and there but this EP made me a fan for life!!! This guy is good at what he does and can kill different styles of music which many emcees fail at. I'm excited for future projects from him and hopefully he gets more recognition from the people because he deserves. And oh, this EP was just a taste of a bigger project he'll be dropping this year.
Favorite tracks: Outta Here, The Realness, and Other Girls

Casey Veggies' Sleeping In Class- We all waited for this to drop for a very long time and I must say, it was worth the fucking wait. Through this mixtape, I truly have love and respect for Casey and his team and they all inspire me. Casey shut every hater up and gave every supporter what they wanted and needed with this 'tape! He is gonna be fucking legendary! Lyrically, production wise, vibe wise-it's just overall epic! Love it!
Favorite tracks: DTA, 30,000, Get Through, and Ridin Roun Town

Reese's Reese Vs The World- Why does everyone hate Reese? I fuckin' love this dude! He dropped a mixtape before this one but I never got around to listening to it. But I love this mixtape! He's truly reppin' for the ATL and is showing people that the A is still bringing dope emcees into the game. He stays true to who he  is... even if everyone is hating on him. Had this 'tape on repeat for a while, shit is illy.
Favorite tracks: My Mentality, Candy Lady, and Day In The Life

JoJo's Can't Take That Away From Me- Despite all of the label drama, JoJo managed to give her fans a dope ass mixtape with amazing production and her beautiful voice and lyrics. I'm not really into R&B mixtapes, but when I saw JoJo dropped one, I just had to download it. Glad I did.
Favorite tracks:All I Want Is Everything, In The Dark, and Running On Empty

Rich Hil's Limosa Nostra: The Prelude- This is one of my favorite mixtapes from Rich. "One of...", what am I talking about? This is my favorite mixtape from him. Yea, I think it beats Lost Limos II. Anywho, he really did his thing on this mixtape and it was only a prelude to Limosa Nostra Act I. The production was just magical and the songs were very heartfelt. I listen to this 'tape when I feel like floating and drifting off to another world. Mixtapes like this is why I remain a Rich Hil supporter.
Favorite Tracks: Baby Love, Love Me Good, Daydream, and Legalize It

Curt@!n$'s Killer- With all the freestyles he dropped leading up to the release of this mixtape, I was just to anxious  for it drop! DopeboyC showed that he can kill (no pun intended) any style of music. I mean from N.E.R.D, to Cee-Lo, to Adele-he murdered it. I guess we'll leave the cleaning up of the murder scene to the haters. Dope mixtape!
Favorite tracks: Bodies freestyle, Rolling In The Deep freestyle, and God Bless freestyle

Asher Roth's Seared Foie Gras with Quince & Cranberry- Before this, I hated Asher. Like I liked him when he first came out and then he made those foolish comments (remember that?). I went to a concert of his and Cudi's and left before his set. But when I heard of this mixtape, I gave him a second chance. Second chances are golden! Love this 'tape! Witty lyrics, dope production, and the title of the mixtape? Doesn't get any doper people! Let's just say, Asher is no longer on my shit list.
Favorite Tracks: Muddy Swim Trunks, Toni Braxton, Hot Wangs, and Sour Patch Kids rmx

Curren$y's Smokee Robinson- Confession: this is the first Curren$y mixtape I ever downloaded. 0_0 I mean I been told yall I was late on the Curren$y Is Dope train. What a great start to my Curren$y collection though! Smokee Robinson made me a fan of his forever. Ski Beatz is the truth and word to Don Cannon. Also, Curren$y is a great performer. Saw him at the first ever Famous Factory show in NYC this past May.
Favorite Tracks: Jordan 3's, Invincible Jets, Lemon Kush, and Monte Carlo Music

Telephoned's Off The Hook- Never heard of the group before I saw this mixtape (or EP) on some blog. It looked interesting, so I downloaded it. I freakin love this! Maggie has a dope voice and her covering all this radio hits is just too dope! I want an album from them asap! Perfect party music! All DJ's need this 'tape.
Favorite Tracks: Breakfast, Smoke Rings, and Million Dollar Bill

Well that's it! Honorable mention is (of course) my No Shade! Thank you to everyone who downloaded it and enjoyed it! No Shade the 2nd Summer will be even bigger and doper! Can't wait for all the dope mixtapes of 2011! No wack shit please! Stay dope!