Discovery Of The Day: OnCue. 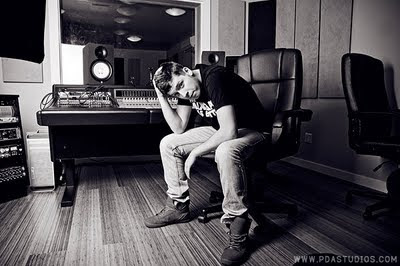 The post is long over due. We'll get to that later. This post is about me (re)discovering CT to BK emcee, OnCue aka Cuey. I was browsing one of my favorite blogs now, Be All Mighty and came across Cuey's latest video, Feel Tall. As I was falling in love with effortless flow, soulful voice, and just overall city boy charm, his name was ringing a very loud bell in my mind. I searched by blog email and discovered two emails from Cuey! One of which even gave me props on my blog, especially for my "random Blink 182 posts". I totally feel like such an asshole! How could I over look this guy? He's epic! Well everything happens for a reason and maybe back then, which was June 2010, I wouldn't have appreciated his dopeness as much as I do now.

OnCue would be my dream artist when I was in my Hip Hop/Rock days. He perfectly fuses the rawness of Hip Hop and lyricism with his soulful and Alternative rock melodies. He's like Wu Tang meets the Dave Matthew's Band. Well I don't know if I used  the right examples of artists, but you catch my drift. According to the Feel Tall video, it's seems that a lot of people have had some mean things to say about Cuey and I just can't believe. They're probably like Wiz Khalifa fans or something *cough cough*. I mean, I could see why one would say OnCue is mainstream but you can only come up with that conclusion if you just look at the surface of the artist.

Within his lyrics, he says a lot and no, there's no hidden messages or anything. He tells his struggles as a regular dude and as an artist on the come up. He addresses those who doubt him and mocks the ridiculous aspects of the music industry. And all in really dope way cause his flow is on point. I think people need to really listen to the music an artist provides to the people, absorb it, and then "judge" accordingly. I don't think Cuey is mainstream in the negative way we think of the mainstream, but I def feel like he has mass appeal. OnCue is gearing up for the release of his next project, Can't Wait which should be dropping any day now! So look out for that!

Cuey, I'm so sorry for overlooking that really nice email from you like a year ago. I am indeed an asshole. Lol But you sir, you are dope and keep doing what you do. There are plenty of people out there who will appreciate your dopeness like I do.

Here's his latest video for his single, Feel Tall!