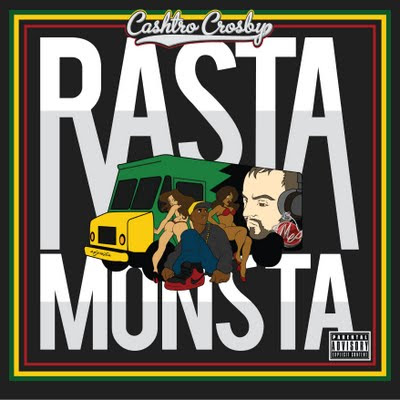 Cashtro Crosby-Rasta Monsta
As promised, I said I would review all projects that came my way. Not only did Cashtro Crosby's Rasta Monsta come my way, I've been waiting it for about a year now. Let's just say that when this mixtape dropped, it was a very happy day in Essi's World. If you don't know about Cashtro, search him on the blog or click on his name as a tag at the bottom of this post. I've been blogging about him for too long for yall not to know who I'm talking about. With that said, on to the review.

Cashtro Crosby had a mission when starting this project. He wanted to tell a story. And it was his story. Which I think can be summed up in the title of a bonus track on this 'tape, selling jeans and crushing dreams. Cause that's exactly what he's doing. This project was inspired by the HBO series, How To Make It In America, where their fictional plot is Cashtro's reality. So as far as the concept goes, Cashtro gets a full dope points in that section. Plus, I love that fucking show!

Story time over. Onto the music. As usual with most mixtapes, Rasta Monsta has it's good and it's bad. But to be honest when it comes to this tape, the bad is really just based on my personal preferences. And I after going over what I didn't like, there's only one bad thing. Too many features. I want and need more Cashtro. There was especially too many singer features. A singer or two on a project is cool but on like every song? No thank you. I exactly feel like some of the songs would have been better without any singing or even hook. Artists, sometimes you just gotta let the beat breathe. Features from fellow emcees was a little excessive too but I can deal with those. Favorite track with a feature was Jealousy 2011 featuring one of my favs, LaVish. I would love to hear a Cashtro x LaVish x Casey Veggies track. Or even a Cashtro x Domo Genesis track-which could be dope as fuck.

As far as the good, this mixtape is good. Really good. Cashtro has definitely stepped it up from his last project, Crosbyification which was epic itself. The production he picked out for these tracks were lovely and created a cool and slick vibe for 'tape. It was a different vibe from what we've heard from Cashtro himself before but it fits him well. I think it goes to show how versatile he is as an emcee. He still brought that some Crosby energy that I love about him to every track. If you need something smooth to ride out to, something chill to smoke to, or just something to nod your head to, download Rasta Monsta. This is good music and it's projects like this that make me happy about and continue what I do.