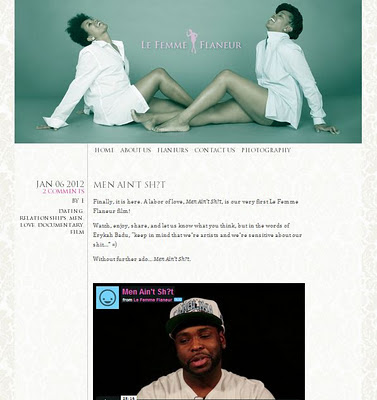 My big sisters, E and LB aka Le Femme Flaneur just dropped an amazing documentary titled, Men Ain't Sh?t! So if you are doing anything else, I suggest you stop and go and watch this-right now! I swear you will love it! Here's some background on the film:

Inspired by one of many conversations about love & relationships, “Men Ain’t Sh?t” is a short film intended to skew young daters’ perceptions of 20something men – in a positive direction. Often, young women assume that the dating game is harder for us due to countless horror stories in which the guy is always at fault for the dissolution of the relationship. In an attempt to hold on to the hope that men are capable of being amazing partners in their 20′s, we decided to let them speak for themselves. Ten young men from various backgrounds were asked a handful of questions about past loves, relationship expectations, and their feelings about women. Their candor and insight set the tone for an interesting journey into the male psyche.“Men Ain’t Sh?t” aims to not only give young men an opportunity to share the side of the story we do not often hear, but also create common ground between all of us in the wonderful world of dating.


Oh so you really want to watch this now, don't you? Thought so. Here's the link:

I would like to say that I love E and LB to death and they inspire with every boss move that they make! They are originators and are destined for greatness. These ladies are legends and I am blessed to know them (well I had no choice but to know E, that's the blood sister. lol). So just like I would cosign any artist or producer, DON'T SLEEP ON LE FEMME FLANEUR!!! Okay, stop wasting time and watch the film. Enjoy!