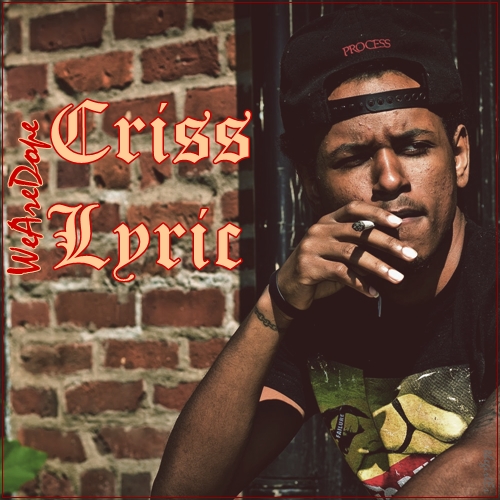 And we're back at it! I couldn't let us leave the month of July without another installment of everyone's favorite series, WeAreDope! Bringing it back to the world of music and giving you another view of an emcee. Hope you all enjoy this one!

I got my first taste of this CT emcee's talent back in 2011 when I was looking for tracks for my first 420 mixtape, Proposition 19. My NE brother, Front Page told me to check him out and when I heard his track, Yellow Jumpsuit, I knew that I just discovered a gem. And that was the beginning of me being a true fan  of the one and only, Criss Lyric. Criss has to be one of the most talented and creative artists I've ever come across and he's still evolving into someone great. He is legitimately one of my favorite artists out right now. I have to admit, when I met him late last year here in Atlanta, and we were in my car on the way to and as we were at the studio, I was having a moment. I was quite silent and shy cause deep down inside, I was freaking out like a 13 year old girl at a Justin Bieber concert-front row! Imagine your favorite artist riding with you in your car-wouldn't you have a moment too?! But now, Criss has taken over the driver's seat and we're all riding with him as he travels down the road to greatness. I hit him up with some interesting, genuine questions and thoughts I had for him. Welcome to the mind behind the music, this is WeAreDope: Criss Lyric!

Interview after the cut! 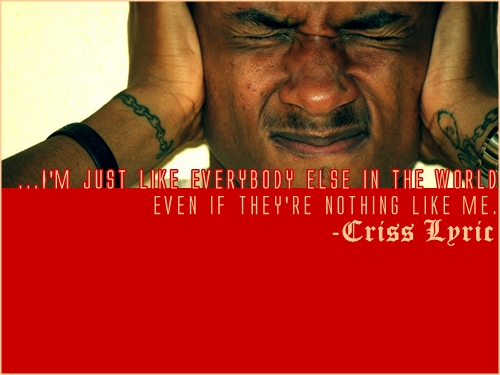 For starters, who is Criss Lyric and what is your specialty?

Criss Lyric is an artist, son, brother, uncle, best friend, worst enemy depending on who you're asking, but most importantly I'm an individual. I specialize in doing whatever I want, whether it's musically or just on some everyday life shit. For the most part, I'm just like everybody else in the world even if they're nothing like me; I have this sort of empathy when it comes to people, so I can understand others more than they can understand me, and I just want them to understand that.

How long have you been making music and was this something you always wanted to do?
I've been writing lyrics since I was 8 years old, but I didn't start creating actual music until I was about 16-17. When I was a kid I used to read, write, and draw a lot, so I was able to turn my thoughts into art before I knew anything of it. But I also fucked with animals a lot too, so for a time I wanted to be a veterinarian. I sucked at sports, never cared about cars or computers, and rap was the only thing I was totally comfortable with; it just felt right and I had fun doing it. So for the past 14 years I've just been perfecting my craft and I can honestly say I'm nowhere close to where I want to be or what I think I can be.

You’re from Connecticut and I’m aware of many other emcees from the state as well. Is the CT Hip Hop scene just as big as, say the NYC or LA Hip Hop scene? And if so, what do you think makes it thrive?
I wouldn't say that it's as big as NY's or LA's music scene but the talent level in CT is super high. The problem is that there isn't enough unity among artists, not to mention a lot of people making some weak shit, but the people who take their art serious are the ones giving you quality along with quantity. There's still a lot of misconceptions about Connecticut as a state but there is so much more than people even know. For example, we're supposedly the richest state in the U.S. I don't know that side of CT; I grew up in Windsor which is right next to the capital of Hartford, and Hartford is no joke. If I took you through the North End or South End of Hartford and showed you how people are really living out here, it would blow your mind. The amount of culture out here is crazy though and I'm proud to say that this is where I'm from and I know for a fact that when we get our moment, we're going to accomplish great things.

I know that you and fellow CT emcees, Jigz the Flyer, Big Pat, Al-Fatir, and Jitta On The Track all have your own individual movements yet have really good ties with one another and appear on each other’s projects. How important do you think it is for that kind of unity amongst artists, especially when all coming from the same city or state?

I feel like it's real important, especially with all of us being from Connecticut. People in CT have this "crab in a barrel" mentality where they legit don't like to see somebody succeed, and a lot of people who are successful have this "Hollywood" mentality, where they feel as if they're above everyone else, and that's what makes it so hard for artists out here. So when I linked up with those artists, it's because I fuck with them on a personal level and I'm a fan of their music as well. I don't just fuck with anybody, and anyone who really knows me, knows that I'm always to myself, and that comes from my environment and my experiences. So I understand why people in CT are the way they are, but if I see somebody doing their thing and get to know them as a person and I fuck with them, I have no choice but to respect it.

You refer to yourself as “Frass Boss” and I actually had to Google and find out what “frass” meant but it refers smoking weed. Do you feel like stoner rap is somewhat of a sub-genre of rap or are artists putting on this stoner persona because it’s trendy in rap music today?
I think stoner rap has always been a sub genre, it's just that now a lot more people smoke weed. It's funny because you'll get around some of these niggas and see that they don't really live that life, but if you're just smoking weed because it's the new wave, then that's corny, in my opinion. To be honest though, I don't think I make stoner rap, but I can see how my music could fall into that category because that's the life I live. I only talk about what I know and one thing I know is that I smoke a lot of weed, and when I call myself "Frass Boss", I take pride in screaming that because that's my title. So no matter what I do, there's going to be a euphoric element in the end product.

Last year, you dropped your EP, LOUD:music which was inspired and entirely produced by Hudson Mohawke. How did that come about? 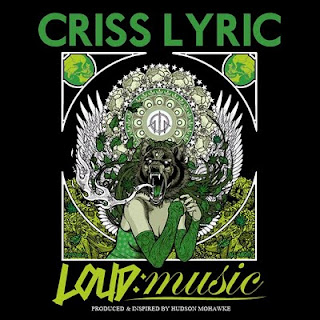 Dowload: Criss Lyric's LOUD:music EP
The LOUD:music EP was just something I wanted to do for my fans, as well as Hudson Mohawke's fans. I was actually sitting on the title for a month or so, and then one day my producer Zulu was playing a couple of Hudson Mohawke beats off of youtube and the music was just speaking to me and I couldn't understand why nobody hopped on any of these beats I was hearing. So when I got to the crib, I looked up Hudson Mohawke's whole catalog and just went in from there. For a week I just disappeared; my phone was off and I didn't leave home at all. I just secluded myself from everything but my thoughts and feelings at the time. I was so immersed in the music and I didn't want to write anything sub par to the man's beats. So I approached it as if he handcrafted those beats for me personally and from there LOUD:music was created.

Recently you dropped Indian Summer which was such an amazing project that was just packed with all kinds of vibes and dopeness. What is the next step for you as an artist when it comes to the music? How do you see yourself evolving?
Thank you, I'm glad you feel so strongly about the project and believe in the music. I never know what the next step is for me, which makes it so fun. I'm always growing as a person, so a Criss Lyric song or project 6 months ago, sounds nothing like a Criss Lyric song/project now. With Indian Summer though, I was just trying out a lot of things that I thought sounded good to me. I look at the whole tape as a successful experiment, because we made it how we wanted to make it. So when people hit me up on Twitter about the tape, I feel good because that lets me know that they fuck with me as a person because I am my music, and that's why I appreciate my fans because it's more than just music to them as well. So with Indian Summer, I let them get to know me through my actions, but the next project I want them to know me through my real thoughts and feelings, so I'm working on a way to communicate those two musically, and once I figure out what I want to say and how I want to say it, then I'll release it.

Download: Criss Lyric's Indian Summer mixtape
Lastly, what next can we expect from Criss Lyric overall?
As of now, I'm just pushing Indian Summer as hard as I can. I just released an EP with Al-Fatir titled Jointventure; we did that in less than two days. I'm working on a few videos for both projects as well. I just started the writing process for my next tape Infinity; I'm not sure as to when I'm dropping that but I'll be putting out a lot of unreleased music between projects, so I have my hands full with enough work to keep me busy and to keep everybody entertained.

Thank you to Criss Lyric and all of All Mighty for being amazing people and personally supporting me and my work. I just have the utmost respect and admiration for Criss, especially after this interview. I'm very excited for him and his future endeavors because he is bound to legendary. Until the next feature, farewell! Oh and umm, #AHAM!