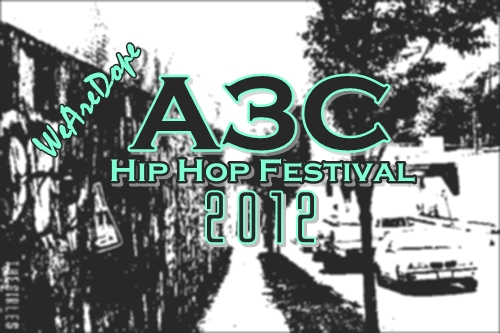 Two weeks ago was the 8th annual A3C Hip Hop Festival here in Atlanta, GA and of course, I was there! This year, A3C aimed to do things bigger and better with not only having stages at The Masquerade but also shows and events at the Lil 5 Points area and many other spots throughout the city. They even had a film festival portion this yr.

It was my third year attending the festival but it was my first year attending it as part of a team of a performing artist, which gave me a totally different point of view of the festival. There were many positives and yes, even some negatives to this year's festival but I can never truly shit on A3C because events like this are really good for the Hip Hop community. You meet tons of amazing people, discover new artists, get free music (whether you listen to the CDs or not, they're yours!), and shit, you get to be out the damn house! For some, out of your own state. Everything and everyone at A3C is about showing love and support to each other and respecting each other's grind and that's why I make sure I make it out to the festival every year.

With that said, I took some really dope photos of my time at A3C this yr. Photos include performances, backstage shit, and some candids of some dope people I got to mob out with during the festival. Shout out to every single person I met and chopped it up with! Whether it was our first time meeting or we're old friends catching up, it was awesome seeing you beautiful people!

More photos will be posted on my Tumblr at thegirlEs.tumblr.com! Be sure to credit my ass if you use my photos!!! Enjoy!

Photos after the cut!