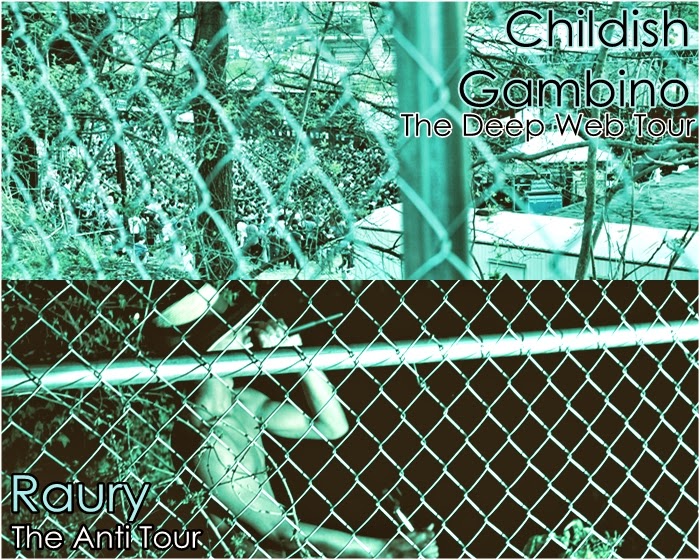 On April 3rd here in Atlanta, it was a beautiful day. It was sunny, warm, mostly clear skies-perfect weather for an outdoor concert. So when Childish Gambino stopped by his hometown of Atlanta for his Deep Web tour, it was as if the stars were aligned. Not only was the weather great but the show was sold out. Gambino got 4,000 (estimated) people to The Masquerade's Music Park for his one-man-festival like show.

When I first heard about this tour, I really wanted to go because its Childish Gambino, who I love, and it's for his new album which I love as well. But when I saw that ticket price, it wasn't happening. It was $35. Which is a little above average what I usually pay to see a show. I will usually pay around $10 to $25 (plus tax) to see a show in Atlanta. That's if I even pay at all. But $35... for one act? He had no openers or even listed "special guests". Just Childish Gambino. Bruh, I went to A3C before for $35. So I didn't buy the ticket. I'm a graduating college student, the money is too tight to not get great value out of anything I purchase.

Even though I didn't have a ticket to the ATL Deep Web Tour show, I somehow found myself on April 3rd, in my car across the Masquerade hearing what appeared to be his sound check. And in that moment, I wished I had bought a ticket. But I was actually in my car waiting for something else. Something that was more of an "once in a lifetime" type event.

At the time, I only knew about this artist named Raury for like three weeks. People asked me if I heard of him, I saw his name all over Twitter, and it seemed like everyone I knew was his biggest fan. Based in Atlanta, Raury aka King Raur is not your average artist. Even though he only has a few songs up on his Soundcloud, you just know he is on some other shit. And some good shit at that.

Raury had his own mini tour going on and he called it the Anti Tour. Basically, artists who stopped in Atlanta for their tour, Raury would afterwards set up his band and perform right outside the prior show's venue. For instance, after Tyler, the Creator made an ATL stop, Raury had his band inside a rental truck playing as he performed his single, God's Whisper, on top of the truck. It's unauthorized, lowkey illegal, but it's fucking epic.

So the next stop on Raury's Anti Tour was Childish Gambino's Deep Web Tour. Ahhh, it all makes sense now doesn't it? So yes, I was there to witness some history. This Anti Tour concept was too dope (and too free) for me to not see it for myself. I met up with ForteBowie and Worldwide Ty and as we were waiting for Raury's "epicness" to begin, we kinda got to check out Gambino's show. I had to somehow see why people were forced to see one artist perform for $35.

From the bridge above the Masquerade, in tall grass, and behind a fence, I watched parts of the show. The show's DJ did an extra lengthy set pretty much playing the greatest hits from '98 to '03 with splashes of 2 Chainz, old KanYe, and Michael Jackson-yes, Forte and I had that same confused look you have now while hearing it. Apparently, the set was long because there were the good ol "technical difficulties". And then, Gambino came out and the show began.

By this time, I was at another part of the bridge, totally not interested in Deep Web's awesomeness anymore. But I heard everything. Childish Gambino pretty much did all of Because the Internet and a few tracks off his first project and other fan favorites. One of my favs off the album, Crawl, sounded amazing! It was epic and you could feel the energy of the song from miles away. Worldstar was dope too. But I guess those technical difficulties kicked back in cause the rest of the show was not as epic. It had that typcial concert "blah" feel. But of course, the crowd loved every moment of it.

Not to be harsh, but I was ready for Gambino to end his show so Raury could do some epic shit. So after what felt like five hours, Deep Web came to a close. Raury's band was ready, bright lights on, masses exiting the venue and on the other side of the fence, in the brushes-there was Raury. Shirt off, hat on, and in full effect went HAM and performed his song. Some people kept walking out, others were like, "the fuck?" but I was just amazed that it was happening. This is probably one of the dopest "stunts" I've seen an artist do.

Raury managed to perform his song twice before he had to hop the fence to literally run to freedom and away from the cops. What may have been a good 5 minutes felt like full hour set from Raury. His performance was off guard, intriguing, and bold.  And God's Whisper is such a revolutionary type song for GenY, it needs to be brought to people's attention in that manner. So in other words, I loved every moment of it.

In conclusion, the best way for me to sum up this experience is: If I had $35 of "entertainment money" (as us Marketing heads would say), and had to choose between a full show of Childish Gambino and 5 minutes of Raury, I would choose Raury. And gladly hand him over $35 in cash.

The Deep Web Tour would be wayyy doper in a small venue. I am so happy and proud that Childish Gambino can even sell out such large venues on the strength of his name and work—he deserves all of that. But the feel of the show would have worked out better in like The Tabernacle here in Atlanta. Indoor, with the same stage and light set up would be a mind blowing experience! And because I know a little something something about venues, especially in Atlanta, that $35 ticket price was probably to cover cost for the damn venue. And other things.

Raury's Anti Tour showcased rebellious behavior with perfection. I loved the feeling the uncertainty of how he was going to get away with performing this song, wondering about people's reactions—his showmanship is everything! I just wonder how he is going to top this because he has to top this!

I drove home feeling like this was another experience that one couldn't really have planned. More importantly, an experience that I just felt the need to share. And this is why I love and will continue to do what I do.

Childish Gambino's Because the Internet is available on iTunes and in stores! And here is the latest video from the album, Sweatpants!


I know y'all know all about Childish Gambino, but do yourself a favor and get familiar with Raury. Check out his infamous video for his single, God's Whisper, below!