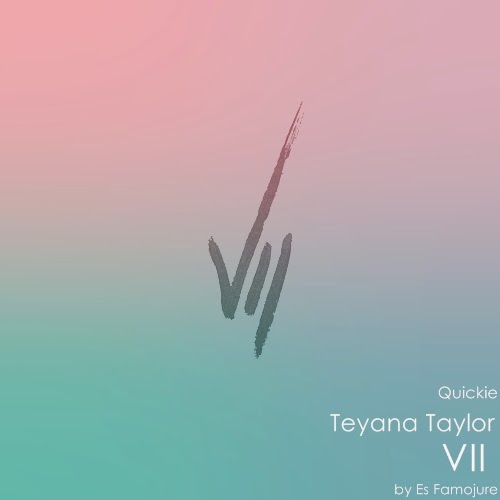 Welcome to the second Quickie on here ever! This time around, I will be reviewing the debut album by Teyana Taylor titled VII. Most of you may know hee from way back when she had her Skater 16 on MTV, having major beef with Rihanna (which is still funny till this day), or just from seeing her around... kinda like a socialite.

But besides that, Teyana is a singer, (rarely) a rapper, and a dancer. And for fans of hers, they have been waiting for an album from her since like forever. And it's here. Oh, and if you didn't know already she is with G.O.O.D Music.

What do I think of this album? I don't think much of it. I think it is so basic and so thotful. Yes, I said thotful. It's such "been there, done that" R&B music. She seems to be trying so hard to be this amazing R&B artist rather than being herself. Everything about this album and Teyana as an artist feels so forced and manufactured. Don't get me wrong, Teyana is very talented-I use to be a fan. But this is not it. And her cussing and saying "nigga"throughout the album is not helping her appeal to anyone-so stop.

Back to my point of the album being thotful. This is like the soundtrack for girls are act/are thots. Crying over men, being deseparate. Then acting like you don't care, you want to/can sleep with whoever, wherever, whenever. I connected with NOTHING on this album. Its not mature music. This is so dumb-high-school-girl music. I don't know if Teyana is writing this music, has writers, or both but I don't care because this music sucks.  Oh, and the features do nothing for me. NOTHING!

I'm just a bit upset at how wack this album is. And to know that people where hyping this bullshit up like, "Yo, her album is actually dope bruh." What?! No, y'all tripping. Compared to other R&B artists out right now, this is trash. I had higher expectations and hopes for a debut album from Teyana and this is just not it.