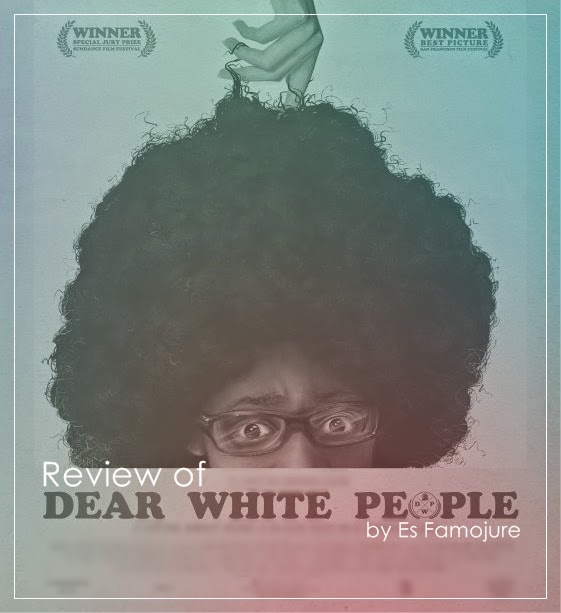 On Halloween, a friend and I were bored and weren't into handing out candy to the kids that rang the doorbell. Evil of us, I know. So we celebrated the holiday like some true boring grown ups-we went to the movies.

We tried our best to avoid watching the social media and critically acclaimed film, Dear White People. I've heard mixed reviews about it and not much else was in theaters. So we got our tickets for the film.

Before I get into my own opinion/concerns with the film, let's talk about the setup leading up till it was in theaters. This film was so hyped! People made it seem like it was going to change race relations amongst young people. Or that it would accurately depict the reality of being young and black in America. The setup was real! And the excitement from everyone who is young and black was genuine. I mean, how often do we get to see our reality, done right, on the big screen?! And the trailer and other promo made it seem like this film could really, really shake things up.

Probably the only thing they got right (or was accurate in the depiction of a young black person's reality) was that yes, it can be difficult being black in a predominantly white university.

That was it! I'm sure that certain people can relate to some of the individual characters but really, even those characters' reality didn't really portray reality.

The plot is loosely based on a real-life instance where a white fraternity threw a Hip Hop/Black party and was in black face, afro wigs, and other stereotypical attire. Which I can appreciate because using entertainment (music, film, fashion, etc) to shed light on real-life situations is good and needed. But everything else fell flat.

One thing that I, and probably many others, thought that this movie would not be was a typical black movie. Extreme portrayals of how black people look and act like. Loud, angry, singing to everything, snapping, mean mugging-all that. For the most part, it wasn't but it definitely had many moments where it was like it screamed, "WE'RE SO BLACK!" and you just had to roll your eyes and act like it didn't happen. I think the best description of this movie in regards to this point is by my brother, ForteBowie. And I quote, "...it's like a movie for young black people, directed by Tyler Perry". This is funny because they actually complain about Tyler Perry in the movie.

Dear America (who isn't young and black),
This is not the reality of the majority of us young black people. A lot of us, more than most people would think, are actually more than happy with being black. And no, we're not going to shout it out every second. Yes, we're not okay with a lot that is going on with black people in America but we're not gonna yell at you, and everyone for that fact, every time we talk. But if you want to bring up those issues, yes, be prepared for some education.

Yes we wear weave. Yes we blast Hip Hop music. And yes, we love eating fried chicken. But guess what? Yes we wear our hair on it's own and love it too. Yes we blast EDM, indie rock, and maybe even some Taylor Swift too. And we love salmon, steak, or we might even be vegetarian! Young black people are more dynamic in real life than portrayed in films and TV shows!


Tell me, how blown is your mind right now?! Yes, the film fell flatter than some relaxed edges in this regard. And this is so disappointing because I think, at least for me, this was the whole reason a lot of people wanted to see it.

And as far as race relations and political stuff, yeah they turned up. And turned down right after AND ended the movie on that note! It was as if no lesson was supposed to be learned from the whole movie.

The movie literally ended, "Dear White People, ...never mind." Bruh? BRUH? "NEVERMIND"?! REALLY?! So for the white people who actually went to see this film knowing that the theaters would be packed out by black people, they learned nothing. They should actually be pissed off about this movie too.

You got nothing from this film. Even on some like real film critic perspective, the cinematography was alright. The acting was actually good. The actors were believable-which pisses me off that the writing of the film was so not what it could have and should have been.

But what do I know? I'm just a young black person surviving in America.